My 2x Great Grandmother was Mary Ellen Price Wright.  She lived her entire life in Kennett, Missouri born March 11, 1852 and dying December 21, 1904.  Her parents were John Price and Sophia Medlock Price.  Her obituary, printed in the Dunklin Democrat, has an interesting fact about Mary Ellen.  Besides being survived by her husband and 5 children there is mentioned “a brother living in California that she has never seen”.

Who was this unseen brother?  I was on the hunt.

The 1850 US Census of Dunklin County lists John Price, his first wife, Nancy Vancil Price and 2 doors down, (John) Marion Price, age 20 with his wife Julia.  Of note:  The Dunklin County Courthouse burned in 1872 with all records lost.  Marion and Julia were likely married in Dunklin County but record of her maiden name is lost.

In History of Southeast Missouri by Robert Sidney Douglass (1912 ed.) the biographical sketch of J. L Wright (Mary Ellen’s husband) states that Marion left Missouri to seek his fortune in the goldfields of California.  Family lore recalls that Marion and his father had a falling out and he left the county because of that.  Whatever his reasons, Marion joined the thousands of people flocking to California. 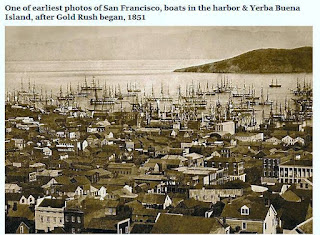 So about 1851 Marion left Dunklin County for the West.  It is uncertain which route he chose but, as he had proceeds from a land sale, it is likely he took a steamship to New Orleans and from there a ship to San Francisco rather than the more arduous overland trip.

The Gold Rush was on!  The non-native population of California quickly swelled from 2000 to over 300,000 by 1853. I wasn’t able to locate Marion in the 1852 California State Census but there is record of his marriage to Mary Elizabeth Scott October 26, 1857 in Sonoma County, California.  It is unknown what happened to his first wife, Julia.  Perhaps she perished on the trip or never accompanied him at all.  If she divorced Marion the records were lost in Dunklin County.

It is unclear whether Marion tried his hand at gold mining because he is listed in the 1860 US Census as a farmer.  J(ohn) M(arion), age 29, M(ary) E(lizabeth), age 23 and son T(homas) S(cott), age 1 are living near Geyserville, raising horses, milk cows, and hogs.  They had another son that died 1859.  Mary sadly dies giving birth to their third child in 1862.  Marion registers for the Civil War Draft in 1864 but is never called to serve.  Marion marries for the third time to Lucy Scott, Mary’s sister, on September 3, 1865.

Marion and Lucy have 5 children over the years, 3 of which lived to adulthood – John Vancil, Joe Dodd, and Maude Elizabeth.  By 1871 the family has moved south to Sanger, California, near Fresno.  Marion continues to farm until his death in 1905.  Lucy lives to be 84, dying in 1930.  They are buried in Mountain View Cemetery in Fresno, California.  Of all the Price children, only Thomas married and had a family.  John V. and Maude never married and died in Fresno.  Joe was a deputy sheriff that died in the line of duty.  His murderer was never apprehended.

Why did Marion never return to visit his family in Missouri?  Perhaps because his father died in 1856 and he had little interest in a half-sister 20 years his junior.  Perhaps there was bad blood and his vow to never return was upheld.  Perhaps financially it was not possible to make a trip back east.  Whatever the reason it seems a shame that Mary Ellen and Marion never met. 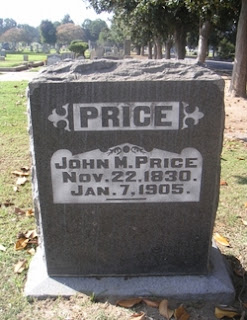