The Buchanans and Bibbs : Family Lore – Fact vs Fiction


My Great-Aunt Athena did genealogy the old-school way before the internet.  Writing letters to courthouses and reading unindexed census records on fuzzy microfilm.  She would cold-call people in distant cities who happened to share the surname she was researching just to pick their brains on their grandparents.  She was the keeper of family stories.  But does the family lore hold up to modern scrutiny?

Before she died I got some of her notes on the Buchanan and Bibb families.  She noted:  Duncan Buchanan emigrated from Scotland.  His mother died on the voyage over.  The Buchanan brothers married Bibb sisters and B. F Bibb married Jane Buchanan.

My 2x Great-Grandfather is Duncan Lemonds Buchanan.  He was born Jun 6, 1841 in Carroll County, Tennessee and died October 8, 1923 in Stoddard County, Missouri.  Duncan served in the Union Army in the Civil War and moved to Missouri about 1869.  So not born in Scotland.  However, his father, also named Duncan, consistently lists his nativity as Scotland.  Duncan Sr. married Margaret Lemonds about 1828 in North Carolina.  Their oldest child, Daniel was born 1830 in Montgomery County, NC.  They had 5 more children, moving to Tennessee about 1835.  I haven’t yet found a ship’s manifest listing Duncan Sr.’s voyage to America but he looks to have arrived as a young man probably traveling with his parents.  So she may have had the wrong Duncan but we’ll give a pass for that family lore.

Benjamin Franklin Bibb (1829-1920) is in Carroll County the same time period as the Buchanans.  Years ago when I was first starting my internet genealogy research I posted Aunt Athena’s notes on a genealogy message board.  I got a response from a descendant of BF Bibb of Greene County Arkansas. She was searching for BF’s parents excited at this new information.  However, she had BF’s wife as Jane Pattisoll, married in St Francis County, Arkansas.  I had to humbly tell her I was a noob and this was just family stories and I had no documentation to back it up.

Since then I have dug up more information.  I believe, based on BF’s census and probate records, that BF from Carroll and BF from Greene are the same person.  BF’s daughter, Paralee’s death certificate lists her mother’s name as Jane Buchanan.  Her husband was the informant.  However, BF’s pension request (he fought with the CSA in Missouri) names his wife as Jane Pattisoll married abt 1851 in St Francis AR, though his oldest child in born in Carroll TN.

So why did BF go all the way to Arkansas for a wife? Explaining discrepancies is part of genealogy.  In the 1850 census, BF in 18 years old, living with the Elijah Faulkner family as a farm hand, 2 doors down from (who I believe to be) his brother William Bibb.  Based on an (unsourced, I know, take with a grain of salt) Ancestry posted family tree, Elijah Faulkner dies in 1856 in St Francis AR.  Of note:  The St Francis County Courthouse burned with loss of all records in 1874.  There are no marriage records to reference.  There is a Pattisoll family in that county in the 1860 census.  So it is entirely plausible that BF went to Arkansas with his employer, met and married Jane and returned to Carroll County to start his family. One should take more credence in first-hand information (BF’s pension request) than second-hand (the son-in-law’s recollection). So I think Aunt Athena got this one wrong.

According to her tombstone, Mary Bibb was born January 13, 1850.  I have not found her in the 1850 census but in Carroll County of 1860 she is, at 10 years old, living in the Edward & Caroline Williams household.  Is she related to them?  Edward Williams married Caroline Swinney January 18, 1859.  Looking through all the marriage records of Carroll County I found David L. Bibb married Frances Swinney Feb 9, 1843.  David and Frances are listed in the 1850 census but no child named Mary.  It’s possible Mary’s birth year was recorded incorrectly at some time.  So it perhaps Mary was living with her aunt (Caroline and Frances were sisters) at the time of the 1860 census.

What about Sophronia?  According to cemetery records she was born October 13, 1853.  I have not located her in the 1860 census (and I was unable to locate the David Bibb family in 1860) but she is in the 1870 Carroll County census living with the Daniel McLeod family.  Also living in the house is Octavia Bibb (daughter of William Bibb) married to Norman McLeod.  Sophronia doesn’t appear with the William Bibb family in earlier censuses but it’s likely she is related somehow.

So nothing clearly records Mary and Sophronia as sisters.  However, nothing contradicts it either.  I have written to the Carroll County courthouse requesting estate information for David Bibb and his wife Frances. Maybe there will be clues in his heirs.

So the final family lore?  To Be Determined. 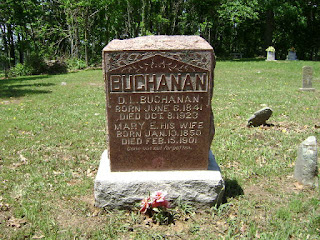