On this Veteran’s Day we pause to thank and reflect on the service and sacrifice of those that heeded the call of duty to our country, those still living and those who have gone before us.  It is estimated our country has been at war 93% of its existence1, this is just one story of one soldier.

John Price is my 3x Great Grandfather.  He was born in 1789 in North Carolina2 (probably Johnston County) and died 1856 in Dunklin County, Missouri3.  He married Sophia Medlock about 18514.  She died in 18605.  John applied for and received bounty land for his service in the War of 1812 in Tennessee6.  He enlisted November 21, 1812 and mustered out August 22, 1813, serving under Captain Moore and Colonel Thomas Hart Benton.  His regiment was ordered to New Orleans under the command of General Andrew Jackson.7


This was not for the famous ‘Battle of New Orleans’ that made Andrew Jackson a national hero.  It was, however, the period that earned Jackson his nickname of “Old Hickory”.

After years of diplomatic dispute with Britain, (they hadn’t really gotten over the whole Independence thing), war was formally declared June 1 of 1812.   Jackson was already a colonel of the Tennessee Militia being appointed in 1801 but at the time was enjoying the life of a wealthy plantation owner.  The War Department ordered Jackson to gather 1500 militia volunteers and go to New Orleans in anticipation of a British invasion there.  This earned Tennessee its nickname “The Volunteer State”.8

The British, however, were a no-show to New Orleans.  Jackson and his troops had already traveled over 1000 miles by flatboat and were to Natchez, Mississippi before word reached them.  General Wilkinson, a political rival of Jackson, ordered the militia disbanded – rather than sent home or on another military mission.  Jackson basically had over 1000 men on the frontier with no means or supplies to return to their homes in Tennessee.9 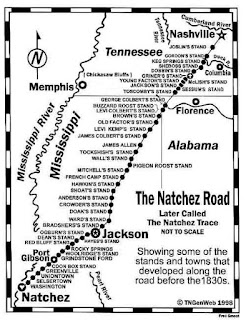 The overland route from Natchez to Nashville, The Natchez Trace, was not the beautiful National Parkway it is today.  Originally a path utilized by Native Americans, the Trace became a trade route for white settlers who, in the days before steamboats, floated downriver to sell goods but had to walk back north to their homes in Ohio and East.10  Jackson was probably familiar with this route as a business man and  set out, with his men, to return to Tennessee.

As the War Department did not supply any means to return, Jackson spent his own money to feed and house his men on the long march.  He had no guarantee of reimbursement given his somewhat contentious relationship with Wilkinson and the rest of Washington.  He marched alongside his men, his officers at time surrendering their mounts to the sick and exhausted volunteers.  His men called him “tough as old hickory” and the nickname stuck.11  They arrived at Nashville in April of 1813 averaging about 20 miles a day.12

Jackson was eventually able to secure wages for the militia, John Price among them, for their time during the journey home13 and Jackson was reimbursed for his expenses.

Thank you, gentlemen, for your service. 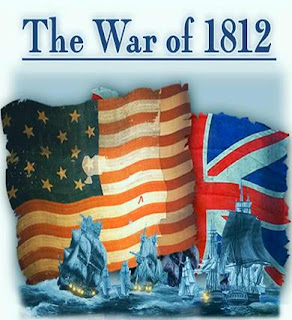 
I need to preface this story by saying I do not know my exact relationship to John Franklin Slaughter.  DNA evidence suggests a familial tie to my Grandfather Slaughter.  My working theory is John is the product of my 2x Great Grandfather William Taylor Slaughter and his first wife Jane Clay.  So far, all evidence points to this but until a reasonably exhaustive search is completed this relationship needs to be still in the “Maybe” column.

But his story is too interesting to not be told.

John was born in 1869 in Cherokee County, Alabama.  He married Faithia Smith in 1888 in Polk County, Georgia.  They had 8 children and he died in 1946 while living in Easom Hill, Georgia.  His descendants still live in the area.  He was a coal miner by profession but was also involved on the side in the Smith family business – moonshine.

John’s brother-in-law was Will ‘Belltree’ Smith, one of the most notorious bootleggers in the area of northwest Georgia/northeast Alabama.  Smith’s claim to fame was his procedure for his customers to acquire the liquor.  He had a bell attached to a tree along the road.  The customer placed their order and money in the tree and rang the bell.  The customer would leave for a period of time, returning later to retrieve their purchase, never seeing the seller of the whiskey, thereby giving deniability to all parties in the illegal activity.  As the tree was very close to the Georgia-Alabama border it was easy to evade authorities by crossing over the state line whenever trouble was spotted.

Moonshine was a way of life in the southern Appalachian Mountains.  John’s profession of coal mining was low-wage and dangerous.  Miners of the time did not have government safety regulations and union worker protections of today.  John’s nephew died in a mine accident at age 14.  Families were large, hill ground was not highly productive, and a bushel of corn was worth much more as a gallon of moonshine than for sale as livestock feed.  While Prohibition was in effect from 1920-1933, production and sale of corn alcohol without paying taxes was common many years before that.  The purveyors of such were said to be operating a “Blind Tiger”.

In 1901 John was arrested in connection with the sale of liquor at the Bell Tree.  Likely his $100 fine was paid by his brother-in-law who made a small fortune selling moonshine.  Will Smith was, by all accounts, a violent man who died a violent death in 1908 at the age of 39.  Reports of his death were published in newspapers across the east.  After his death his sister and her husband continued to operate the Bell Tree.  Newspaper accounts report the Bell Tree still was finally broken up by government ‘revenuers’ in 1917.

Because Smith had accumulated so much wealth in his short life naturally there was a fight over his sizable estate.  Smith’s mother claimed Will’s wife, Alice, never legally married Will and therefore was not entitled to inherit anything.  Depositions of the family members give insight into the lives of the Smith family.  Alice’s mother testified that Alice was married (previous to Will) at the age of 12 but that her husband had died.  John himself testified Will had never married Alice and also kept several other women on his farm and had several children with them.  He said Will beat Alice (and the other women, too) and that she had run off more than once.  He also testified about the operation of the Bell Tree.

The lawsuit was unsuccessful and John’s wife did not inherit any of her brother’s wealth.  She died in 1929.  John continued on as a miner until his death in 1946.  They are buried in the Salem Baptist Church Cemetery in Bluffton, Alabama. 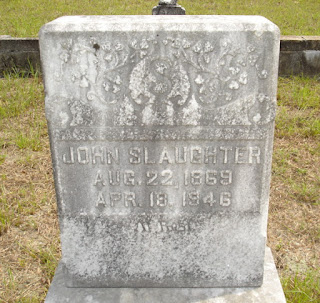 When the Mississippi Ran Backwards


People have different reasons for doing genealogical research.  Some want to be related to famous historical figures.  Some strive to go as far back as possible.  Some want to find distant cousins and make connections.  That’s not me.  I want to know my people.  Part of knowing them is learning about how they lived day-to-day and how they reacted to what was going on around them.

Many of my father’s family lived in Southeast Missouri around 1800.  They emigrated from North Carolina and settled in what is now Bollinger County.  They were largely farmers and ran mills to process grains into flour.  There was little trouble with the Native Americans in the area.  It was a hardscrabble existence but life was good for my ancestors.  That was all to change on December 16, 1811.

The first of the Great New Madrid Earthquakes occurred.  Because there were no seismographs at the time, scientists have estimated the first to be of at least a magnitude of 7.  Over the next 3 months, 2 more large (7-8 magnitude) earthquakes occurred.  The quakes were felt as far away as Pittsburgh, PA and Charleston, SC.

As the area was sparsely populated by European-Americans, there were not many eye-witness accounts of the happenings.  There were reports of the ground heaving and large chasms opening.  The log buildings of the area actually held up fairly well, the logs allowing for some flexibility but the stone chimneys fell leaving the settlers with no means of heat – and it was winter.  Some fled to boats thinking the Mississippi to be safe during the shaking but the great movement of the earth under the water made the river flow backwards for a time and left the riverbanks devastated and nowhere for the boats to safely dock.

During the months after the initial quake, aftershocks, some large themselves, were constantly felt – as many as 2 or 3 per day.  The ground was constantly in motion.  What may have been your farm pond may suddenly raise and flood your crops and home.  Sand may heave up onto what was once productive cropland.  It was years before the shaking subsided completely.  The effects can still be seen today in the area.  Although my ancestors stuck it out, many people fled the area.

In 1815 the Federal Government passed the New Madrid Relief Act, the first disaster relief act in US history.  Naturally, that lead to the first fraud of a disaster relief act.  The government plan allowed a landowner in the affected area to swap their land for other unowned land in the Missouri Territory.  Communications of the time being what they were, many speculators of St Louis and the large cities of the East converged on the rural area before the local citizens were aware of the program.  Residents sold their farms cheaply to the speculator who, in turn, exchanged it for more valuable land, typically near St Louis.  Not to be outdone however, the locals soon began selling their land multiple times leaving court battles to rage for years afterward.  While I have no evidence my ancestors engaged in such activities, it’s entirely possible.


They say, “May you live in interesting times.”  Genealogy is so much more than names of parents and dates of birth.  People then, as now, were products of their times.  Knowing the trials and tribulations your ancestors experienced is as important as their successes.  Hopefully some of their grit and determination has passed on to current generations. 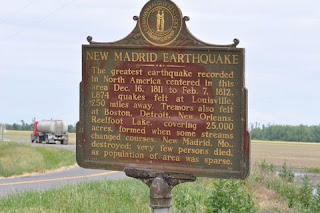