My 3x Great Grandmother is Amanda Samira James.  She was born August 27 1829 to William Jacob James and Catherine Yount in Cape Girardeau County, Missouri.  Being of the James family in Missouri one’s natural curiosity is to discover a relationship to the most famous of Missouri James’ – the notorious Jesse James.  I was on the hunt.

After a thorough, exhausting search of Jesse’s family history (just kidding, I read his Wikipedia entry), I found Jesse’s family was from Virginia, via Kentucky, and settled in the Kansas City area where Jesse and his brother Frank were born.   https://en.wikipedia.org/wiki/Jesse_James  As my James family was from North Carolina to Southeast Missouri, I was content there was no close familial relationship.

Sometime later I was perusing the cemetery listing of my Great Grandmother Sophia Heitman Robinson.  She is buried in the Patton Cemetery in Patton, Missouri.  There also was a listing for Edward O’Kelley.  This struck me as odd as Patton citizens were generally of German descent.  Also it rang a bell in my own genealogy.  Turns out Sophia’s sister Rosanna married Zachariah O’Kelley in 1882.  Zachariah and Edward were brothers.  Edward’s Find-A-Grave listing proved interesting.  http://www.findagrave.com/cgi-bin/fg.cgi?page=gr&GRid=30175351
It turns out Edward was the man that killed Bob Ford, the man that killed Jesse James.

The story of Jesse James and Bob Ford is well known.  Ford was a member of the James-Younger gang and a trusted friend of the James family.  However, Ford made a deal with the Missouri Governor for his amnesty by killing Jesse.  Ford shot an unarmed Jesse when he was hanging a picture in his house.  Ford collected the $5000 reward and moved to Colorado.

How Edward was connected to the James-Younger gang is somewhat cloudy.  Some reports say Edward married into the Younger family.  Some say he ran with the outlaw gang at some point.  Whatever his motivations, Edward sought revenge for Jesse’s murder.

Newspaper accounts of Bob Ford’s murder in 1892 indicate that Edward waited for Bob to open his saloon for the day, called out to him, and gunned him down as he turned around.  Unfortunately for Edward, he was not seen as the avenging angel he thought himself to be.  He was arrested and imprisoned for the murder.
Edward was incarcerated for several years and upon his release drifted to Oklahoma.  There Edward was killed in a shoot-out with police.  Edward is buried in Oklahoma City.

He has a memorial marker in Patton, Missouri erected by his family. 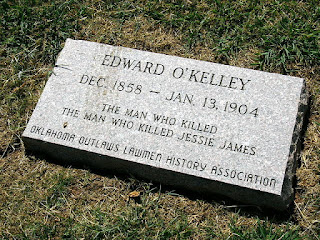 Serendipity
Posted by Jean at 1:38 PM