A common practice of genealogists is finding their ancestors in all census records available.  This helps identify geographical movements, children’s names (where noted), and neighbors who may also be kin. I have a spreadsheet that I have check-marked years as I find each record for an ancestors’ lifetime. 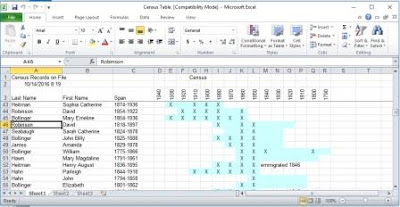 Notably missing is the 1870 census record for David Robinson, my 3rd Great Grandfather.  David was born in 1818 in Southeast Missouri.  He married Jane Seabaugh 10 Aug 1841 in Cape Girardeau County, Missouri.  I have located him living in Cape County in 1850, Bollinger County in 1860 and 1880.  He died in Patton, Missouri 27 Sep 1897.  He and Jane had several children, including David Jr. my 2nd Great Grandfather born in 1854.

I have scoured the 1870 census pages for David and family but they are nowhere to be found.  It doesn’t seem likely for David to move away and come back.  Perhaps that page of the census has been lost or illegible.  Or perhaps David had other reasons for avoiding the census taker.

The 1870’s were difficult times in Southeast Missouri.  The Civil War had just ended and the area was still rebuilding.  Missouri did not join the confederacy but many folks in the area had immigrated from Tennessee and North Carolina and sympathized with the South.  Each side set up ‘home guards’.  No major battles were fought in the area but constant skirmishes between the home guards, military detachments, and guerilla fighters left towns and agriculture in ruins.  Being confederate sympathizers (and some former rebel soldiers), people there were not happy with the government in general.

So, given these harsh conditions, how was David to support his family? Likely he did what many of his neighbors did, set up an illicit distillery.  Yup, moonshine.


As this was way before Prohibition (1920-1933), a person could make liquor but you had to have a federal license (or stamp) for your still.  In 1872 a stamp cost $25 – around $500 in today’s money – much more than poor farmers like David could afford.  These federal excise taxes were introduced in 1862 along with the income tax to pay for the war.  After the war the income tax was allowed to expire but the excise taxes remained.  These taxes made up over 1/3rd of the government’s income so they were strictly enforced.

On 11 Jan 1872 David Jr. married Mary Emeline Bollinger, the daughter of John Bollinger.  In 1880 the Robinsons, including David Sr., were living next-door to the Bollingers.  I located a newspaper article from 1878 describing the criminal case of John Bollinger in St Louis Federal court for illegal liquor manufacture.  (Evading the excise tax was a federal offense.)  The article describes John as an old man but a persistent and determined offender.  Another article describes the arrest of Damon Robinson for the same offense.  Damon was a cousin of David Sr.  Other articles from newspapers across the country describe southeast Missouri as a hotbed of illicit whisky manufacture, citing numerous arrests and destruction of stills.   At one point the militia had to be called in as backup for the federal agents against a mob of local citizenry determined to keep them out.

So it’s likely David was also involved in this illegal activity.  Avoiding government agents, even just a census taker, may have been a normal response.  A thorough search of the archives of the Federal Court dockets may yield an arrest or conviction.  Something for the to-do list.  By the turn of the century the Robinsons and their neighbors in southeast Missouri settled back to agriculture as a profession.  David Jr. died in 1922 and is buried in Patton Missouri.

Also interesting to note, several of the newspaper accounts describe the women in these situations as being profane and abusive to the federal agents.  I prefer to think of it as strong-willed and determined in defense of their family and homes, at least when it comes to my heritage. 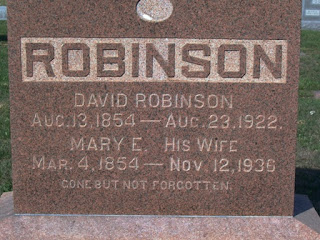